Back to Cowra Stories 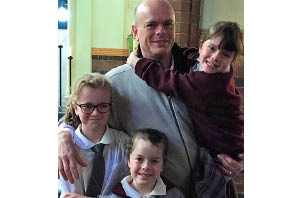 “I was originally based in Sydney. I’ve always enjoyed the country and I enjoyed doing secondments when I became a doctor. I had a pretty good secondment going with Orange – I was based in Westmead and coming up. Then I had a choice when I was about second or third year out and I thought, ‘well, everyone seems to be buggering off to England, but I think I might go to Orange for a while’. So I did obstetrics and that sort of thing and then ended up hanging out in Orange for a few years and really enjoyed it. I had no specific ambition to do anything in particular, I was just working in the hospital doing different jobs when the opportunity arose to do General Practice Training, which I hadn’t specifically thought about. I thought I’d give it a go, and I got terms at Cowra and Condobolin. I enjoyed both terms but Cowra was a real eye opener in terms of what can happen here – obstetrics and all those sort of things, having your own hospital to work in, being able to do your own obstetrics and anaesthetics and work in general practice – I’d never really had exposure to this sort of style of practice before and I just thought ‘wow, this is really good!’.

So, it was really about that point of exposure.

The term I had in Cowra just clicked really well with me. I liked the style of medicine, the style of hospital. I liked the spread of the doctors here – young, old, male. It grabbed me that this was a good place to come. I just really enjoyed the term.

Job satisfaction was a big part of it. My wife, Jen, is from the country originally and she had ambitions to live in the country again, so Cowra suited her well. Now Jen works here as a diabetes nurse.

Being a rural GP proceduralist is a great job. One of the doctors here once said this style of medicine is actually quite high up the evolutionary tree, it’s just not recognised as such. I thought that was an interesting way of putting it. It’s true, the work here is challenging, difficult, busy and varied, but it’s pretty much whatever you want it to be.

If you’ve got a brain that can only handle three things, then you go into sub-specialty medicine and you get very good at three things and it’s nice to know those people are there, but we don’t need 28 of them out here. We need people that have broader ways of looking at things.

It’s a really good place to bring up kids. We have three under ten. There are options for their education. Getting involved in the community is very easy and worthwhile as well.

I live out of town and I can get home in less than 10 minutes without any traffic. I’m in a place where I’m quite happy to be on a weekend. I don’t really feel like driving to the coast thanks. This’ll do.”

Back to Cowra Stories