Back to Bathurst Stories 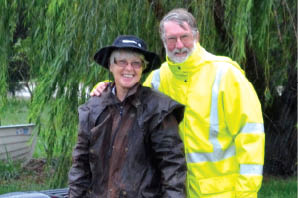 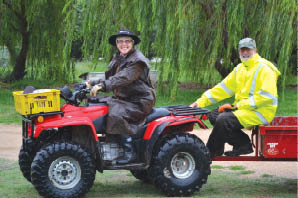 On rainy day in late summer, Dr Ross Wilson and his wife Jeannette come rolling up from the back paddock on a four-wheeler. Dressed from head to toe in wet weather gear, Jeanette drives and “Dr Ross” perches on the back trailer. They have been putting out hay for the sheep.

“Some of the ewes are pregnant so we have to keep feeding them despite the green,” explains Dr Ross, referring to the deceptively lush pastures brought on by recent rains.

The Wilson’s 80 hectare sheep stud is just ten kilometres from the centre of Bathurst – a thriving regional centre and Australia’s first inland city.

“We’ve enough land to keep us extremely busy,” says Dr Ross cheerfully. “It gives us the balance between work and lifestyle.”

It is beautiful country. Wiradjuri country. The undulating hills of the Bathurst plains are fed by the Macquarie River, part of the Murray-Darling basin and the largest river system in Australia. Sheep, wool and beef cattle are the main primary industries, while stone fruit, grapes and corn also form part of the agricultural tapestry of the region.

The Wilson’s moved to Bathurst in 1988, having decided it offered them the best mix of medical practice and schooling opportunities. In Bathurst they raised five children (and now have four grandchildren), forged impressive individual medical careers, learned the ways of the land and embedded themselves in community. Over twenty years later, they continue to live fulfilling lives in Bathurst, Dr Ross as a GP in Bathurst and Jeanette as a Child and Family Health Nurse in neighbouring Oberon.

“I still maintain obstetrics and anaesthetics,” explains Dr Ross. “I’ve got general practice access to the hospital, the practice is busy enough but not too frantic. I’ve got time for patients; time to form relationships that are important.”

In 2003, Dr Ross was named the Australian GP of the Year for his high standard of patient care, dedication to training and community involvement. Among other things, Dr Ross donates his time as a medical officer with the local St John’s Ambulance Brigade. In 2013, he was honoured by popular ABC radio host “Macca” as the year’s “Australian All Over”, an award that recognises people who help the community and set an example for others. He accepted the award “on behalf of all the rural doctors working around Australia”.

“I drive for five minutes to work. I’ve got grass under my feet and an unrestricted view. To me, that’s the way life should be. Why sit in a concrete jungle when there’s all this available?”

Dr Ross believes more GPs should consider the many benefits of working in regional areas.

“Working as a rural GP gives you diversity,” he says. “If you’re a specialist, you know that the next person who walks in the door is going to have the same area of problem as the last person who walked out. That narrowing down, whilst it might be intellectually satisfying for a while, I think is too restrictive. I like to know that the next person that walks in the door might be 2 years old or 92 years old, might be male, female or intersex, and might have any problem on the planet. To me, that’s more of an intellectual challenge.”

Working as a locum in more remote regional areas for four weeks a year enriches Dr Ross’ work and life.

“On most of my locums, if I chose to accept every invitation to dinner, I would never have to cook for myself! One of my good mates runs the news agent/general store in Brewarrina (“Bre” to locals) sends me down a carton of Splashe Cola on a regular basis to remind me he exists! It’s that relationship you develop over years. He taught me to shear.”

Dr Ross’ advice to medical students considering working in regional Australia is to educate themselves widely.

Back to Bathurst Stories