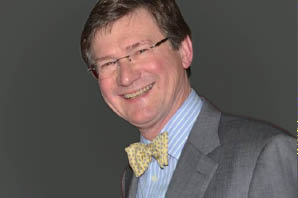 “Rural practice is always very interesting, never boring and professionally very satisfying. And it is local people who make it the great pleasure it is to work there.”

“The (medical) school has been wonderfully received by the people of Lithgow,” says Dr Dearin. “People are justly proud of the fact that we not only have a Medical School here but also have two universities training students for the future in a variety of disciplines.”

Dr Dearin, who was recently named a “Lithgow Legend” by the local newspaper, has lived and worked in Lithgow for 14 years. Dr Dearin and his wife Susan, who is Practice Manager of the Lithgow General Medical Practice, love the fact that Lithgow is so close to Sydney, yet still has all the advantages of a regional, rural community. Having grown up on the beautiful Sydney Harbour, Dr Dearin describes himself as a “rural convert”

“Life in Lithgow has been very good both professionally and personally,” says Dr Dearin. “We established a medical practice in 2000 and I have been a VMO at both Lithgow District Hospital and Lithgow Community Private Hospital during this period of time.”

“I did not originally come from a rural background, having grown up on Sydney Harbour at Cremorne Point. I had the very good fortune to marry my wife Susan in 1973 while still a medical student, who had, as an infant, spent her formative years on a dairy farm at Camden. The contemplation of Rural Medicine was thus made easier by her childhood experience so we decided to ‘give it a go’ in 1983 and have remained in rural practice since that time.”

In addition to their medical careers, the Dearins run a beef breeding operation on their farm just outside of Lithgow. Dr Dearin says the farm provides them with relief from their busy professional lives.

“I feel very much part of the community of Lithgow and am privileged to provide medical care from “womb to tomb’ within that community. I am more than just a service provider because I identify with Lithgow as my home town and the district where I am engaged.”