Back to Orange Stories 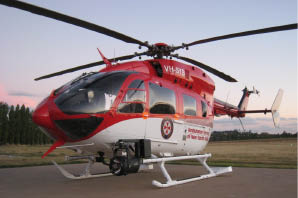 Image thanks to NSW Ambulance Service

In one of the most significant developments in regional trauma care in years, and a collaborative coup for local communities, a new and improved emergency helicopter service based in Orange will service Central Western NSW in early 2014.

The Orange Health Service is the largest rural health facility in Australia, providing care to a population of approximately 45,000 people and specialist support to over 200,000 people including the communities of Cowra, Parkes, Forbes, Grenfell, Condobolin, and other towns.

With doctors and paramedics on every flight, the new 24 hour, seven days a week emergency helicopter will deliver faster, higher quality clinical care across the region. Having dedicated staff on base is expected to speed up critical take-off rates by up to 30 minutes. Additional staff will mean the advanced ambulance, which operates from the helicopter base, will also be able to be used 24 hours a day.

Former Director of Intensive Care at the Orange Health Service, Dr John Lambert, says although Orange will function as the base for the new service, from a health professional’s perspective the most significant benefits would be felt in smaller communities.

“It’s not about Orange,” Dr Lambert said. “Orange has the services to look after its patients. For us, it’s about the outlying sites.”

Dr Lambert believes the high standard of medical services in the region, such as the new emergency helicopter and state of the art base hospitals, are a real incentive for health professionals seeking to move into the region.

Member for Orange, Andrew Gee, said the faster response times will mean a majority of patients will be able to be treated within the Western Local Health District.

“It will also lead to increased cooperation between hospitals in the region,” he said. “Most importantly, the extension of the service is going to save lives. It won’t matter the time of day or night. If you have an accident in western NSW or need urgent medical care – the helicopter from Orange will now be able to get to you – and fast.”

For years, the regional emergency helicopter service was only able to function for ten hours a day. Stories of emergency helicopters being called in from Sydney while the local chopper sat idly in a hanger due to staffing or equipment problems, concerned the community and triggered years persistent lobbying led by Orange City Council with the unwavering support of local MPs, Centroc and the broader community.

In 2011, Andrew Gee presented a petition of over 30,000 signatures to State Parliament calling for an urgent resolution to the issue. With 48% of the signatures from Orange and the remaining 52% from as far afield as Bathurst, Parkes Forbes, Narromine, Gilgandra, Canowindra and Young, the petition of unprecedented numbers was a great example of regional cooperation.

“It was no ordinary petition with 30,349 people signing it, making it the largest petition ever tabled in NSW Parliament,” Mr Gee said.

“The petition galvanised and united the people of the Central West in an unprecedented way. It represented a clear and united voice from the west. The role of Centroc was crucial because it demonstrated that the communities of the west were united in seeking this service.”

Councillor Ken Keith, Chair of Centroc and Mayor of Parkes, believes the new service is an excellent example of communities and government working collaboratively to achieve a common goal. “It is really pleasing for all the mayors of Central NSW Councils that we were able to pull together for the benefit of the whole region” Cr Keith said.

The new emergency helicopter service in Orange is a part of a series of state-wide reforms to aeromedical services announced by NSW Health Minister Jillian Skinner in July 2013. NSW Health expects the demand for helicopter emergency retrievals to increase by 23% across the state over the next ten years.

Back to Orange Stories