Westfund – from adversity to strength 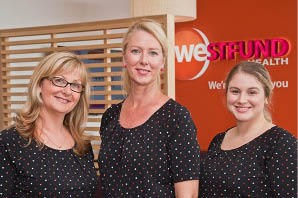 “Our mutual community support remains our strength and provides the opportunity to fill gaps in health services through the communities we serve.” Grahame Danaher, CEO Westfund Health

Lithgow is the proud home of Australia’s largest regional private health fund. Established in 1929 to co-ordinate fundamental health services for the region’s miners, Westfund is the embodiment of the Australian spirit of hard work and a fair go for all.

The Lithgow State Coal Mine, established in 1916, was New South Wales Government’s first venture into coal mining. It produced coal from 1921 until 1964 and was one of the biggest mines on the Western coalfield. Life for a coal miner was hard and dangerous; hours were long and pay was poor. Ill health and injury were common but access to medical services minimal.

In 1929, NSW State Government Industrial Relations Minister, Jack Lang, who went on to become Premier, enabled critical legislation that mandated doctors and ambulances be available for mine workers. Lang’s legislation forever changed the conditions under which miners worked and triggered the birth of the Wester District Mine Workers Medical Fund – the earliest incarnation of Westfund.

By the 1960’s, the fund had a membership of around 5,000. Over the decades, membership fluctuated with the politics of the times and the fund had to evolve to work within new federal systems such as Medibank and Medicare. In 1987, the fund changed its name to Westfund and adapted to new market conditions by introducing dental and eyewear services.

Today, Westfund provides national coverage for over 100,000 people across a network of 10 branches, making it the 8th largest open fund in Australia. In 2014, Westfund opened a new regional office in Maroochydore on Queensland’s Sunshine. Westfund now employs 170 people and has deep reserves making it one of the most financially robust and secure private health insurance funds

“Westfund, built on humility and resolve, has a solid foundation for further success, based on the strength bestowed by the adversity through which we have come.”

Grahame Danaher came to live in Lithgow as a Director of Westfund in 1987 and was made CEO in 1996. Over the decades, he has dedicated himself to the provision of health services in regional NSW (and, more recently, Queensland), to the community of Lithgow and to raising his own family.

“We have four children,” says Grahame proudly. “Two were adopted from Korea at four months of age and two born to us. All were raised and educated here in Lithgow and we think it was a very good grounding.”

Grahame is extremely proud to be part of a first class business that competes successfully with large multinational organisations and a government controlled private health fund industry while being based in a medium-sized country town.

“Our community base is the point of difference for Westfund. Behind our success is an unrelenting drive to develop the organisation for the members, staff and community,” says Grahame. “Westfund employs 120 people in Lithgow, mostly in high paying jobs with excellent conditions.”

Westfund is pro-active about regional recruitment, establishing a scholarship with Charles Sturt University to encourage home grown health professionals. Other initiatives supported by Westfund include a blood test for bowel cancer program in conjunction with local doctors and a cutting edge research project with the University of Notre Dame into Malignant Hypertermia. (link to MH story here)